Oklahoma City’s Modern Frontier has had quite the renaissance in the last 20 years and as the city changed it lead to many opportunities for our craft breweries to open business. 18 (member) breweries call Oklahoma City home and the list continues to grow each year. From Downtown Oklahoma City stretching as far as the airport and beyond, this 600+ mile-long city offers plenty of stops into a taproom no matter where you’re headed.

Downtown OKC
Embark offers a great way to explore Downtown OKC along the OKC Streetcar. Park at Elk Valley Brewing, grab a few beers and your stop along the Streetcar is right there waiting for you. As the streetcar takes you along the city, a must-stop is in Automobile Alley where you can choose from one of four breweries — or take them all in! Oklahoma City’s Native American Owned Brewery, Skydance Brewery, has plenty of places to just hang out and relax from their patio to their upstairs space which provides a more cozy feel. Be sure to try their Rez Dog when you stop in. One street over, Prairie Artisan Ales offers seasonal selections that are known across the U.S. Up from Prairie, Vanessa House offers a big selection of beers on tap (and to-go)  from their slushy beers to their seasonal stouts and much more. A stop inside their taproom will make you feel like a kid again. A short walk through Automobile Alley, Twisted Spike Brewery is perfect for both beer and food. Their newly opened restaurant, Barley and Bees, offers southern-style, made from scratch dishes that can be paired well with any of Twisted Spike’s 20+ beers on tap.

Further down on the OKC Streetcar, stop by Bricktown Brewery in OKC’s Entertainment District. With a big menu and large selection of beers like their Blues Berry Ale or their Old King Kolsch, Bricktown Brewery is a great place to pre-game before a Thunder game or where you end up after a day spent taking in the Bricktown Water Taxi, The American Banjo Museum or at an Oklahoma City Dodger’s game at the Chickasaw Bricktown Ballpark.

Grab your car and head to Angry Scotsman just west of Downtown where they always have events going on and one of the best patios in town. Nearby, Lively Beerworks can be found in the big purple building that feels like home once you enter. Their taps always feature their Milk Stout, Mexican Lager and IPA and their merch wall is always filled with the best goodies to take home. Both of these breweries have you located near the Wheeler Park where you can ride atop the old Santa Monica Ferris wheel brought to OKC after an Ebay purchase. The area is also home to The Big Friendly – OKC’s beer bus that built a permenant home in the up-and-coming Wheeler District.

Navigate your way up west on Route 66 to Broke Brewing. Their mid-century vibe brewery always has a wide selection of beer on tap or to-go with plenty of events happening at their taproom. Nearby you will find landmarks for Route 66 as well as Lake Overholser where you can kayak, stand up paddle board and there’s even a ropes course for anyone who’s adventurous.

Oklahoma City’s regional trail would be perfect for a weekend getaway if you’re looking to tackle them all. As you can see, there’s several to visit!  VisitOKC.com offers plenty of resources for planning your trip along with hotel accommodations and more! 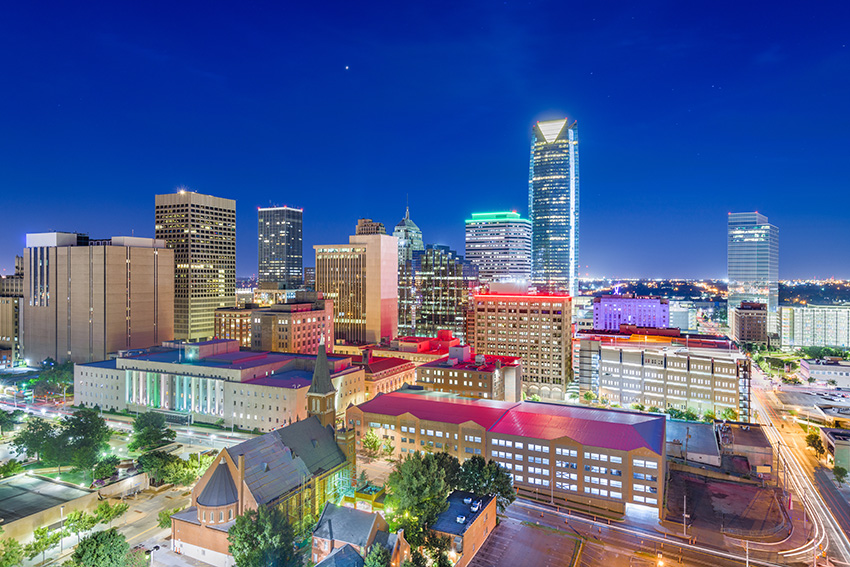